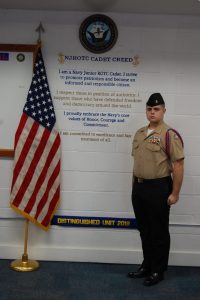 The primary duty of the TO is to develop the annual training plan for the unit, and in coordination with the OPSO, ensure this plan is successfully executed. Under the direction of the XO, specific duties include but are not limited to those listed below:

Cadet Jardell has maintained a GPA of 3.1 and has been in several honors classes. He is also certified in Microsoft word, powerpoint, and excel. Along with that, Cadet Jardell will be completing his fourth year of criminal justice academy.

Cadet Jardell has been a part of the units air rifle team for 2 years, the gator elite drill team for 2 years, and the orienteering team for 1, along with being on armed basic, unarmed basic, armed exhibition, and honor guard. He has earned the Scottish Rite and American veterans award, as well as completing both BLT where his platoon was awarded the title of honor platoon and LA where he commanded the armed basic team.

Cadet Jardell has earned over 180 community service hours and has participated in events such as teacher help week, cleanups, and numerous parades.

Outside of school, Cadet Jardell enjoys playing video games, hanging out with friends and family, and traveling.

Cadet Jardell plans on enlisting in the Marine Corps and become an MP and serve as long as possible. After retiring, he plans on getting a degree in criminal justice and pursuing a career in law enforcement.