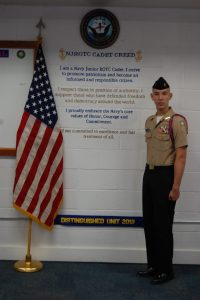 Academic Accomplishment: Cadet Ensign Barrow was a distinguished cadet his freshman year. He is an A-B honor roll student. He is currently taking a college Latin course. He has taken all honor classes and 1 AP class. He also received the Military Oder of the World War medal for NJROTC.

Goals: Starting Cadet Ensign Barrows junior year off, He would like to achieve straight A’s the first quarter and continue the year with the same grades. As for our unit, He would like to achieve a more positive attitude of ROTC and help raise morale in the unit. For his career choice, he plans on going to Georgia Military College for two years and Auburn University for two years and study political science. During college, he plans to do army ROTC and serve at least 20 years in the Army.