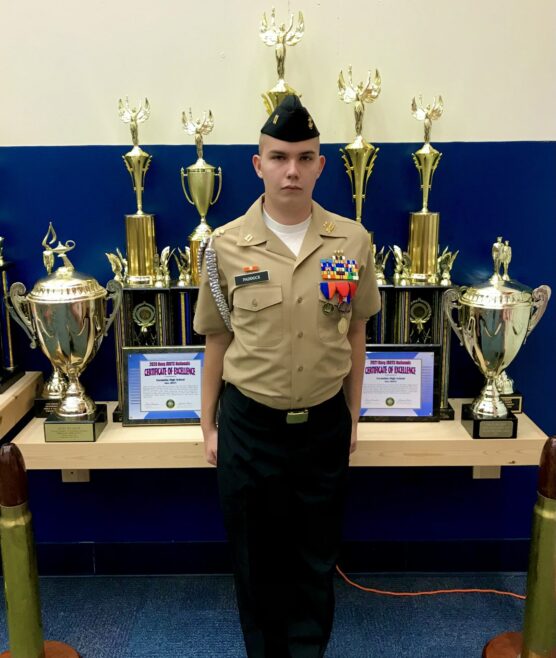 Academic Accomplishments: Cadet Paddock is an academically overachieving cadet. He is an A Honor roll student with a 3.9 GPA and is ranked the 11th highest academically in his class. He has both certificates in Excel, and in Powerpoint. He has the highest grade in his engineering class, and he had the highest grade in both his Algebra 1 and Geometry classes. He has earned Honor Cadet 3 times in a row, being the only cadet in the entire unit to do so.

Extracurricular Activities: Cadet Paddock is currently the Academic Commander of the unit’s drill team. He is currently on the: Drill team, Air Rifle Team, and Orienteering team. He was a part of Brain Brawl and Honor Guard.

Community Service/Involvement: Cadet Paddock currently has 76 hours of community service. He takes every possible opportunity offered to him to assist the community.
Goals: Cadet Paddock’s goals are to set out for Embry-Riddle’s Engineering program, majoring in Electrical Engineering, and picking any one of the prestigious Engineering companies working on innovating the modern world.
Other: He also is the founder of Escambia’s Chess Club.

As a member of this team, cadets will be expected to be able to recall various information from the NS1 textbook (INTRODUCTION TO THE NAVY), NS2 textbook (Naval Science 2: Maritime History, Leadership, and Nautical Sciences for the NJROTC Student), NS3 textbook (Naval Science 3: Naval Knowledge, Leadership, and Nautical Skills for the NJROTC Student), and lastly the CFM (Cadet Field Manual). After studying this information at practices, a number of cadets from the team (averaging about 8 cadets/2 teams per trip) will go to a meet, in other terms a Brain Brawl, and compete against other teams from various NJROTC units located in Area 8. The team as an individual (the 4 person team) can make it to the Area 8 Championships which consists of only units located in Area 8 and if they qualify for the National Championships then they will compete with NJROTC academic teams from around the country.