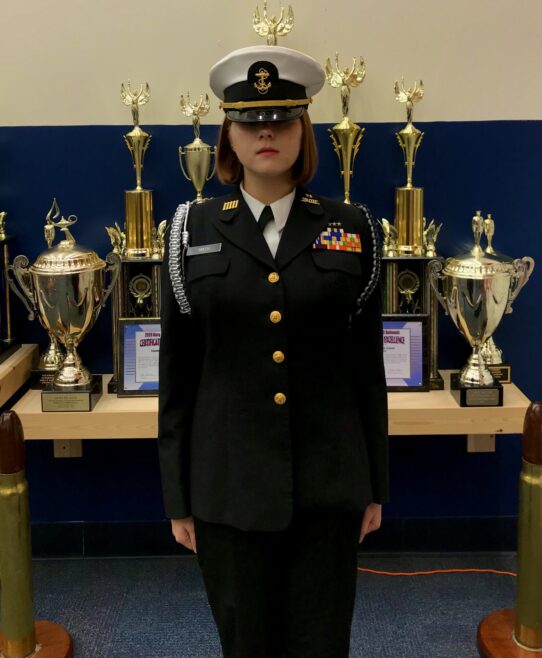 Academic accomplishments: Andrea is a young lady who exhibits a high degree of discipline, maturity, and commitment to excellence. Her leadership qualities and abilities set the benchmark for ALL NJROTC cadets. With a GPA of 3.8, Cadet Smith ranks in the top 8% of her class. Being someone who welcomes any and all challenges, she takes multiple honors and AP classes and is certified in Powerpoint and Excel. During her first year of drill, she received perfect scores on her academic tests, surpassing the average. During Leadership Academy 2020, she placed first in academics. In addition, she has taken cybersecurity classes on NAS Pensacola at the National Flight Academy (NFA), several extensive leadership classes, and even attended the 2021 United States Naval Academy Summer Seminar. Cadet Smith has also undergone field medical training, extensive orienteering training, and been on several tours to newly commissioned USN ships with her USNSCC unit.

Community Service/Involvement: Cadet Smith has 80 hours of community service hours. She is passionate about working with her community and takes all possible opportunities to volunteer. Her volunteer services range from campus clean-ups, car washes, air shows, football games, parades, and hurricane relief.

Goals: Cadet Commander Andrea Smith plans on attending the Naval Academy and majoring in Political science to pursue a career as a JAG Officer in the United States Navy.

Other: Cadet Smith is also a part of the USNSCC unit on NAS Pensacola.

The Commander is responsible to the SNSI for the performance of the Cadet Battalion/Company. The Commander’s duties include, but are not limited to those listed below: